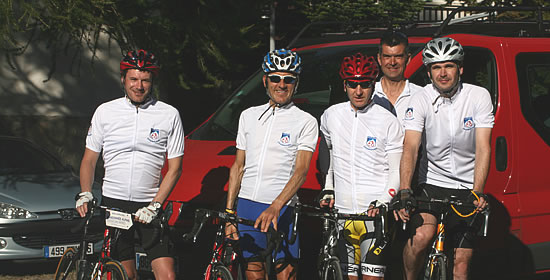 We run our Raid Alpine tours following the specific route organised by the Cycle Club de Thonon.  Here’s Dave’s diary from the 2014 tour, providing a summary of what is an epic ride taking in some of the most spectacular and challenging riding terrain in the Alps.

Our trip started on Saturday when our team arrived at Geneva.  We then drove to Thonon and settled in to our lovely hotel set just above the town.  After sorting out the bikes we sat down and studied the route for the following day.  Duncan who was our support driver had already ridden the trip and cheerfully told us that tomorrow was the easiest of the 6 days ahead.  After some great food and a glass of wine we went to bed full of optimism.

Breakfast at 0730 hrs and after checking the bikes we rolled down to Lake Geneva about 0900hrs.  The weather was a bit dull but no rain as we rolled through the foothills towards the Alps.  There were some testing little hills before the main difficulty of the day being the Col de Ramaz.  Prior to this we got our card stamped for the first time in Habere-Poche – this certainly made us feel we were on the route for sure.  Having descended the Ramaz we got our second stamp in Le Praz de Lyz.  Two stamps before lunch on day one made it seem quite easy – after all there are only ten of them in total!  We rolled on and stopped in Taninge for lunch.  After eating we had  a little climb to Araches and then a fast ride along the valley to Sallanches.   We were still feeling good and the 10km climb to Megeve was steady at about 6%.  The sun came out too and the Hotel Cimes provided the perfect location to relax before our hostess Michelle cooked up some lovely food.

Still our legs felt good and after an early start at about 0845hrs we made our way downhill for about 15km prior to climbing the Col de Saises.  Following our route map it soon became apparent the best solution for everyone was to ride at their own pace and meet for lunch then make our own way to the next hotel on our trip.  Duncan was always there to support with drinks and food in the van.   He also made sure all our bags were safely delivered to the next hotel.  After a long descent to Beaufort the Col de Pre is a short but steep climb with some 10/11% gradients.  It was worthwhile though when we had a superb lunch looking over the lake below the Cormet de Roseland.  It was tough to get going after lunch but at least the Cormet summit was only 8km away but after the great descent to Bourt St Maurice the long climb to Tignes La Reculaz was tough.  We were all certainly feeling tired after another 110km on the bike and at least 2,500metres of climbing.  The Hotel Serac offered great hospitality – we sat overlooking the dam in the later afternoon sunshine wondering what tomorrow would bring.

Duncan had warned us that the next three days were tough so we decided to leave a little earlier.  Perfect summer morning a bit chilly at 2,000 metres but ideal for climbing the Iseran.  It didn’t seem so bad when we got our fourth stamp at the summit.   A fantastic descent to Bessans and then over the Col de Mont Cenis – a short one at 8km and not so steep.

The scenery here was simply stunning and the long descent to Susa in Italy was fantastic.  The road surface was perfect and the 25km passed in no time.  It was hot in the valley and although not a Col as such it was a long drag up the valley to Oulx.  Glad to get there and enjoy the first cappuccino before heading to the Relais des Alpes Hotel.  We enjoyed great Italian food in the evening and we were all in bed by 2200hrs.  Our guru (Duncan) had warned us that tomorrow was a toughie.

We went for the early breakfast and the day started with the Col de Sestriere.  This is needed to complete the route – it was simply a case of going up and coming back down.  At 0900hrs in the morning it was a shock to the legs – still we got stamp number five at the summit.  Back over the Col de Mongeneve and we were in France again.

Duncan was around to guide us through the historic town of Briancon and were soon in the foothills of the legendary Col de Izoard.  It started quite steadily but as you reached the summit (some 20km later) it reaches the famous Casse Desert where it seemed hotter than below.

The descent to Guillestre was long and gradual – you had to peddle but once you hit the Col de Vars that horrible shot of lactic hit the legs immediately.  It was steep too although thankfully eased off before reaching St Marie Vars (some 7km below the Col).  It had been a long day in the sun but it was great to reach the hotel.  We had a few beers that evening – probably not the best preparation for tomorrow for what will be our longest and most difficult day.

Still the sun is out and after the usual hearty breakfast we rolled off.  The Col de Vars wasn’t so bad and after a long descent we hit the foothills of the highest Col in Europe.

The Col de Bonette is a lovely long climb and is one where you can easily find a rythym and enjoy the amazing scenery.  However, there is a real sting in the tail – the last kilometre must be between 12-15% and not what you need after climbing 20km.  We were pleased to see Duncan at the summit with food and drink.

The descent is without doubt the best I have ever experienced – great surface and long sweeping turns to St Etienne de Tindey where we stopped to wolf down some pasta and pizza.  This re-energised the team but the Col de Couillole was a real test at the end of the day – 15km at 7/8% wasn’t easy.

That was about it although we certainly could have done without a nasty little ramp to our hotel in Valberg.  The Chastellan Hotel was particularly nice with a superb evening menu.  There was a definite feeling that we had completed the most difficult days and Duncan convinced us that although tomorrow was 150km most of it was downhill!!

Another gorgeous day.  We started the day with about 25km downhill and another 15km pedalling through some lovely gorges.  Our first Col – the St Raphael seemed little more than a hump at 8km and 6%.  However, some of the group were feeling a bit frisky and made our legs hurt.  It was all going so well until I managed to take a wrong turn and ended up adding about 20km to our day!!  Not the best, but at least we found a great little lunch stop where veal and gnocci went down very well.  A Dutch couple on a tandem soon sent us off on the right route and over the Col de Bleine, our last col, before the long and easy descent through grass to our final destination in Antibes.  It was a long day with 170km on the clock but great to see Duncan waiting with some beers for our team of warriors.  We then changed quickly, had some champagne and a lovely meal in the centre of Antibes before crashing out exhausted about midnight.

Time to head off.  Some of the team were on early flights from Nice, some were staying on for a few days in Antibes and some were off for some more cycling in Tuscany.  Duncan and I jumped in the van and headed back to Courchevel after one of my most enjoyable cycling experiences. 17485 metres of climbing and over 700km completed!!

What a trip, simply amazing.

Find out about this year’s Raid Alpine dates, or get in touch to book. We look forward to cycling with you.